According to a new analysis by Greenpeace USA, plastic recycling is a myth.

We know that the numeric carbon footprint of plastic production in itself is incomparable to other materials. Regarding plastic material’s entire lifecycle, they have a significant carbon footprint and emit 3.4% of global greenhouse gas emissions.

Despite knowing this, most people justify their plastic indulges by claiming to be avid recyclers. However, to put plainly, plastic, which is made from fossil fuels, is notoriously difficult to recycle. There are thousands of different types of plastic, each with a unique chemical composition that can be divided into broad categories. Most must be carefully sorted in order to be processed because they can’t all be recycled at once. This is considered the largest hindrance to plastic-recycling’s success. The  thousands of different plastics containing their own composition, characteristics, chemical additives and colorants make it impossible to  recycle together. Then, considering the rate of production, consumption and usage, there are not enough resources to sort the trillions of pieces of plastics into separate types for processing (Enck and Dell).

Senior plastics campaigner for Greenpeace USA, Lisa Ramsden, said “If plastics were a country, they would be the fifth largest emitter of greenhouse gasses in the world.” According to International Organization for Standardization (ISO), “ plastic production is expected to double by 2040 and increase by 2.5 times by 2050.” This growth can be attributed to general industrialization, but also simple mismanagement of existing plastic. The release of microplastics into the ocean, littering, food takeaway packaging and sanitary yet unsustainable throwaway medical equipment add up to the statistics we see. 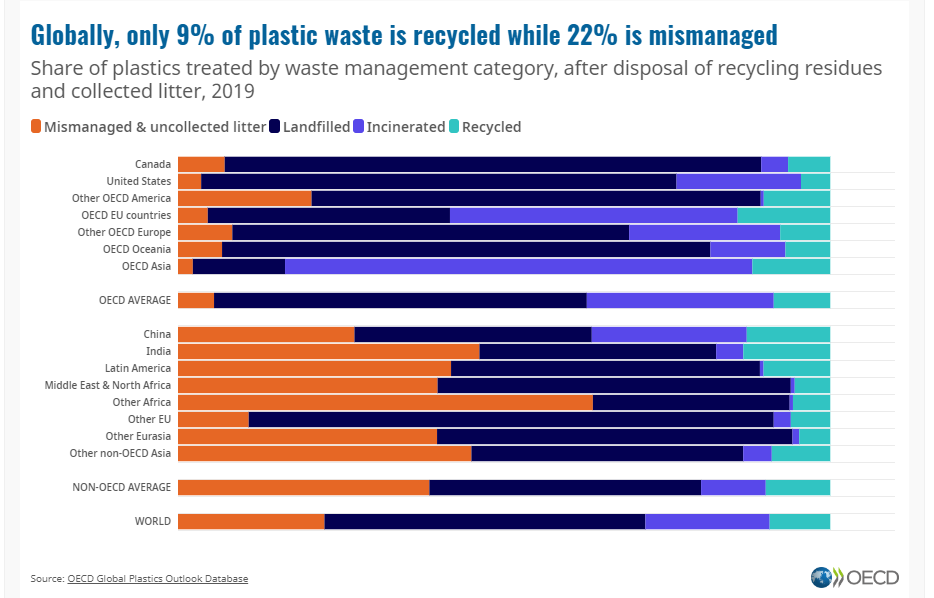 The Greenpeace report also finds that “no type of plastic packaging in the U.S. meets the definition of recyclable used by the Ellen MacArthur Foundation’s New Plastic Economy (EMF NPE) Initiative. Plastic recycling was estimated to have declined to about 5–6% in 2021, down from a high of 9.5% in 2014 and 8.7% in 2018. At that time, the U.S. exported millions of tons of plastic waste to China and counted it as recycled even though much of it was burned or dumped.”

According to the OECD, “Bans and taxes on single-use plastics exist in more than 120 countries but are not doing enough to reduce overall pollution. Most regulations are limited to items like plastic bags, which make up a tiny share of plastic waste, and are more effective at reducing littering than curbing plastics consumption. Landfill and incineration taxes that incentivise recycling only exist in a minority of countries.”

Despite their good intentions, the 3Rs are no longer as reliable as they once were. Recycling cannot be an excuse for overconsumption. The first step is to reduce the materials we use in our daily lives, and then reuse what we already have. Essentially the way to avoid these recycling disasters is by not indulging in single-use plastics to begin with.